The Deniliquin & District Historical Society has posted an image from 1941 of the town from the air.

There was no Hardinge St Oval in 1941 and if the Rovers existed back then they wouldn’t of had played at Jubilee Park in 1941 as there are no ovals or netball courts there.

The rail service was still going strong in 1941 and you can see the goods platform etc there, now all that remains is what the Historical Society has in its collection.

Deniliquin High did not exist until 1954 and in its place is where Football was played in town, can you imagine watching Deniliquin Football Club (now Deniliquin Rams) playing in the middle of the week?

South School did not exist in 1941, it’s location appears to be empty on the 1941 image and chances are if you live around the sides of the school, your house doesn’t exist yet.

Tattersall’s Hotel is visible on the 1941 map along with its still standing stables and so is the Royal Hotel as well as the School of Arts building and the Lyceum Theatre which is where the Regent Theatre ended up after a couple of decades at Town Hall.

Regent Theatre of course is now the Baptist Church. 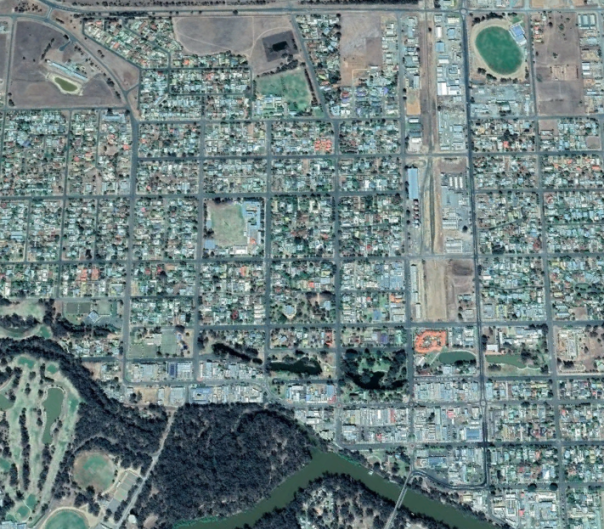 Deniliquin sure has changed in the last seventy-nine years and it will continue to do so though there will always be an element of familiarity in the town as many of the streets are still the same like the curve in Crispe Street and the bend that links Cressy Street and End Street.