Whilst working with Deniliquin History in Photos to figure out the history of the Lyceum Hall/Theatre, our attention was drawn to the a small article from August 1936 that said a Theatre would be built in Cressy Street on the land of the Methodist Church. 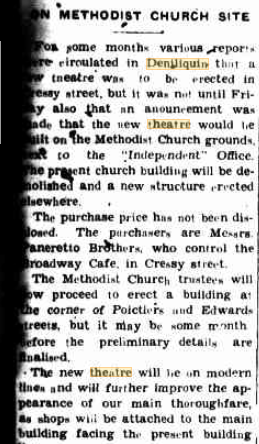 This got our attention because to our knowledge no Theatre was built on Cressy Street and so we began searching for the full story.

Our first clue was that large portions of Cressy Street were auctioned off in the 1930’s with prices record setting in parts.

One of these sales was land where the Methodist Church stood, the Church had a magnificent history as it was built in 1871 and reports of it celebrating anniversary after anniversary are in The Independent which copies thankfully still exists online on Trove.

First we thought the Methodist Church must of existed on the Waring Gardens side of Cressy Street because all the other Churches of the time were there and when we read the Deniliquin Independent was next door to the church we tried mapping out where it could of been.

As we are not very well versed in religion it took some time to unravel all the Church identities to figure out it was not or couldn’t have been on the Waring Gardens side of the street despite both sides of the street once being picket fenced in pictures.

We found plenty of references to the Church but no address or mentions on what was on either side of the church, in those days everyone seemed to know where a shop or church was so there was no need to add an address.

As mentioned earlier, parts of Cressy Street were auctioned off and three banks were built in the 1930’s, the Westpac, ANZ and Commonwealth, all at different times in the decade.

A 1934 photo of Westpac under construction shown something on the left hand side, a roof that seemingly matched the roof of the Church (see below).

A photo around 1936 shows the well remembered former Commonwealth Bank now next to Westpac and next to it should be Douglas Bros. followed by a roof that has the characteristics of the Methodist Church (centre of picture).

Where the white roof is you see a dark rectangle above it, that would have to be a chimney and most likely belongs to the Court House Hotel. 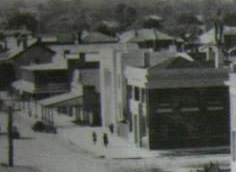 Another postcard photo from later on in the 1930’s (see above) shows more changes as you can now see where Devour is but the roof of the church now gone from the image.

In March 1937 the Paneretto Brothers (owners of Broadway Café) made way for Riverina Amusements Pty Ltd who planned their own cinema and potentially that would of been The Regent.

These two events and the knowledge of what happens in the future led to the theory that the Theatre plan was scrapped and an article found in The Independent confirmed that the land was now in the hands of Cable, Walker and Douglas.

One frustration of pinpointing the Church location was that we couldn’t pin down where The Independent had their office.

It wasn’t until 1938 that the Methodist Church had its last hurrah and was closed in favour of their new Church, which still stands today on the corner of Harrison and Edwardes Street with the original foundation stone intact in the building.

E.B Cable and C. Walker were again in the news in late 1938 as they were looking for tenders for a two story building in Deniliquin.

The ad said E.B Cable and C.M Walker but no mention of R.D Douglas but we know Douglas Bros was just a bit down the street so it appears they had a large chunk of Cressy Street in their possession.

So why is the above so important? A photo in posted 2015 posted by Michael King has provided us the answer, Take a look at the top of the Independent building and then take a look to the right of it.

The top part matches the building that now houses Vogue Hair Design and when you looked to the right you can see the Church complete with name plate in the photo which places it where Papa’s Rich Noodle and/or Devour is.

So there we have it, despite thoughts that it was where the Newsagents is (another church was reportedly there), the Methodist Church and its land was where Papa’s Rich Noodles stands and went down at least to the end of Rockmans.

The search probably would of been over in seconds if we were lucky enough to have found the photo at the very start but the long winded journey was worth it as the mid 1930’s brought a massive change to Deniliquin, a change that is still visible to us today.