Last year, DNS talked about the locals wishing a Cinema was back in town so they didn’t have to travel 45 minutes to see the latest release movie.

It is true the Regent Theatre didn’t offer a whole heap of movies per day during it’s long run but it’s low prices ensured that residents could see a good movie at a fraction of the cost elsewhere even if there was a blacked out Video Store below.

Where could a cinema go now? Perhaps one can be built towards the Stadium end of Napier Street or perhaps be built beside Deniliquin Plaza (corner of Henry and Hardinge) or even be built in the empty space at the corner of Hardinge and Harfleur Street.

Maybe it could be built in North Deniliquin as there is plenty of space there and the North does deserve a build up of amenities.

Then again Deniliquin could always just offer the Deniliquin Baptist Church a stack of cash for the town to reclaim the Regent Theatre and make it back into the cinema it was, the downside to that is would the purchase and refitting price of the Regent be below what it would cost to build and open a brand new one?

Having a cinema back in Deniliquin would be a boost to the lives of residents both young and old, families could save money in fuel costs, nights out can be extended a couple of hours and during the day people could relax to a movie, a money spinner if it’s played right.

All Deniliquin has to do is make it happen. 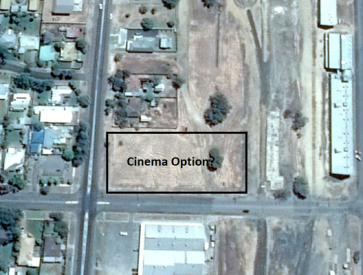 3 thoughts on “Calls for Cinema growing”